We stayed at Chato Mañeru’s Bed & Breakfast in Monterrazas Village, a few minutes drive from Baguio City. Chato is an old friend from SRO Theater days, where he played Cinderella’s stepmother at the Hotel Intercontinental ballroom in the 70’s.

It was great finally meeting his wife Marlies who was a surrogate grandma to my kids (The Tactless One and The One Who Spits) while we stayed there.

After a sumptuous lunch with the Mañerus, we went sightseeing. First on our agenda was the Good Shepherd Training Center. We can’t go to Baguio without buying Good Shepherd strawberry jam which is so hard to find in the Greater Manila Area.

Unfortunately, they had run out of my beloved strawberry jam. The next harvest would not be until end-December. Pampalubag loob, (to make up for my disappointment), I took  shots of the beautiful scenery nearby. What is it about Baguio that makes even ramshackle houses so interesting? 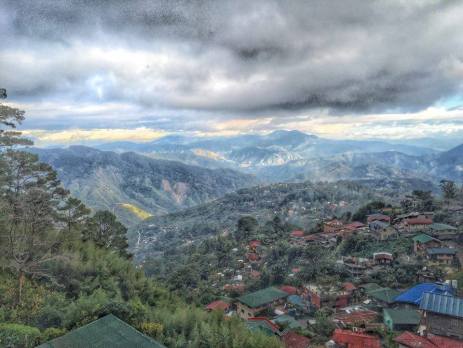 There was a coffee shop in Good Shepherd where I had civit (musang) coffee. That was a disappointment, too, because I was expecting the chocolate aftertaste that I got when I had this coffee before. But the ensaymada and the toasted bread siomao were delicious!

We noticed signs leading to Mines View Park; Cecile and I had been there before but since we were killing time before going to the Baguio Country Club Christmas Village near Camp John Hay, we decided to give it a visit.

There is a concrete arch over the entrance of Mines View that is so tacky, I did not take a photo of it. Please don’t ask me to describe it as I’ve erased it from my memory. But the wifey, Cecile remembers that a construction worker with a jackhammer was one of the figures on the arch. Let’s leave it at that.

Lest I sound cynical, I will say that we enjoyed ourselves immensely. The weather was cool and we were together on a much awaited vacation. We just tend to disparage bad taste.

We couldn’t help but check out the wares of the stalls selling the regular tourist stuff. Cecile bought a blue bonnet for The One Who Spits and a shell necklace for the Tactless One. We admit, we did the tourist thang.

There is a rock promontory you have to bypass before getting to the main view of Mines View. The Tactless One surprised me by clambering up without a worry. I thought she was girlie-girlie, while my boy bunso was the braver one. “He’s scared of heights,” said the Tactless one, much to my chagrin.

I took the photo op gladly as I liked the way the tree was leaning behind my 9-year old. Bisecting the photo with diagonals, the photography pundits say. Cecile climbed up the rock, too while I held on to the One Who Spits before he  tries to shoot some saliva down onto the mines. 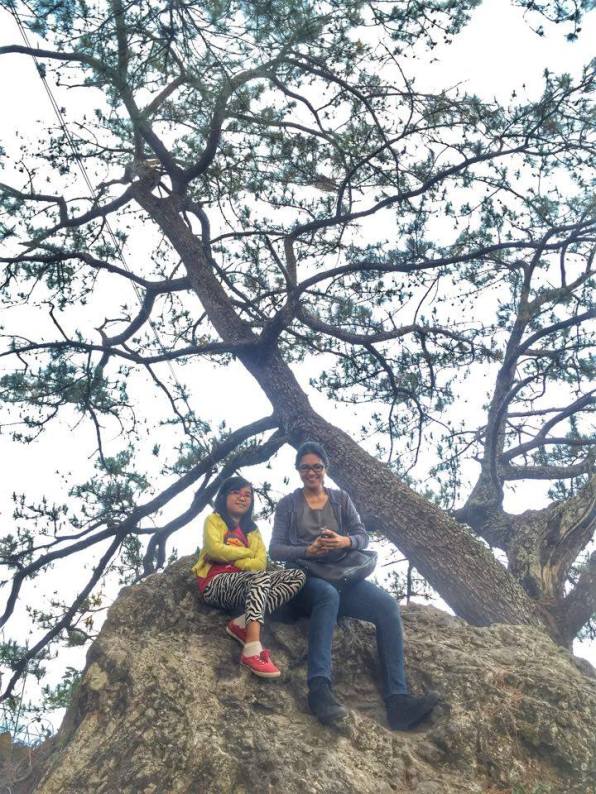 To be continued with the Baguio Country Club Christmas Village in “Part II: Baguio Vacation – Dec 2015.” See how the scenery is captured like a snow globe.

Taking a much needed break, I took my family and Yay-lo (our JDM Yellow Honda Jazz) to Baguio.

To give perspective, my wife, Cecile, is an editor/writer. She has this funny blog about us, where our 9 year old is “The Tactless One,” our 6 year old boy is “The One Who Spits,” and I am “The Hub.” https://supertamad.wordpress.com

Since I am a photographer, I’ll let the photos tell the story (accompanied by a little commentary). 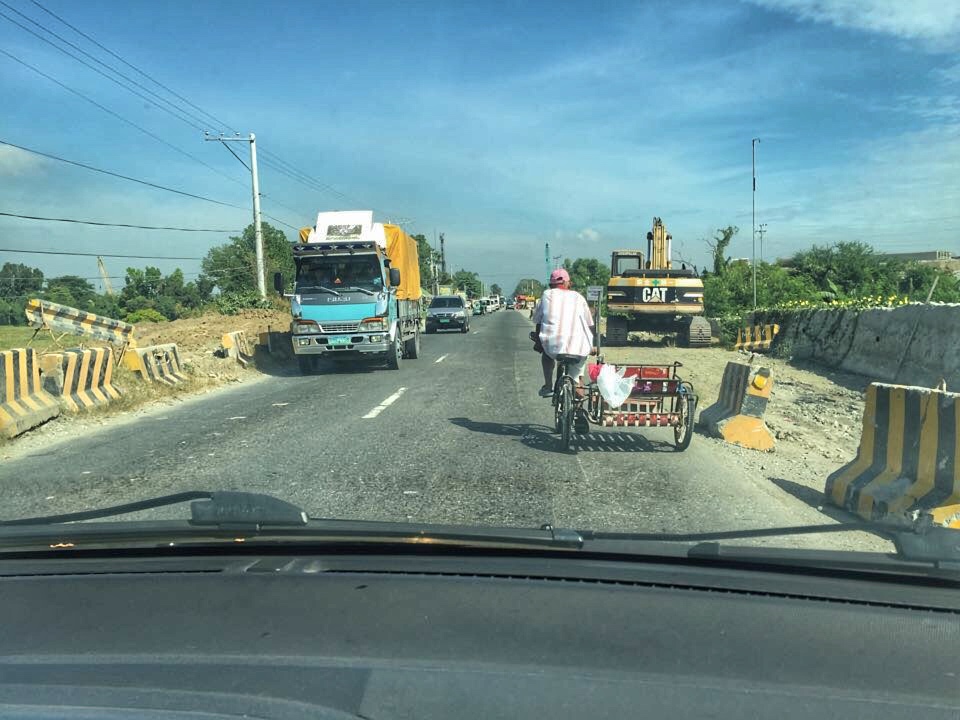 It was a blessed 5 hours from our home in Makati to Baguio, including a stopover for breakfast. I told my wife and kids how it used to take us 10 hours when I was a kid.

We left at 6:30am on a Tuesday morning and made it to Balintawak via EDSA before 7am. Fortunately, Monday was part of a long weekend so there was not much traffic.

Thanks to the NLEX, SCTEX and TPLEX, we were at Kennon Road in a bit over 4 hours. The only thing that slowed us down were the two-lane roads with vehicles like the one in the photo above.

The kids had not seen the Kennon Road Lion, since we passed MacArthur Highway on the only time they were up in Baguio. Unfortunately, there was no good angle to shoot the Lion so I stayed in the car. The Tactless Child, who was not in the mood to see a silly lion, stayed in the car with me.

The One Who Spits faced his fear of the giant monster lion and disappeared with the wifey into the crowd of cars and tourists. They reappeared some moments later after taking an obligatory selfie and we were back on our way.

We stayed at the house of an old friend from Theater days in the 70’s. It’s a very cozy 3-story house in the Monterrazas area of Baguio City. At first,  we thought it would be inconvenient because it was not near Session road. But we found out that it was very close to the places we wanted to visit, e.g. John Hay, Bell House, Wright Park, Good Shepherd, Mines View, and there are lots of good eating places around there, too.

More on that, and our gracious hosts, in my next blog.

The Mañerus have a Bed & Breakfast on AirBnB but they’re not open again until January 2016. I very highly recommend it.

(This is the Introduction of my photo essay on our Baguio stay. Coming up next is Part I.)